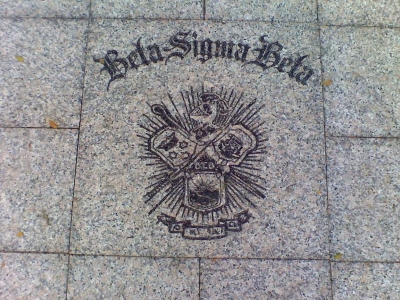 All of you who were in my fraternity from 1959 through 1962 should remember a guy named Steve Sussman. The last I heard of him he was living on an island off the Pacific Coast of California, but I will never forget him… big tall red headed guy who played the uke and guitar.  His nickname was O.W. Most of you will not remember how he got this nickname. So here’s how it happened:

During my semester as a pledge, Beta Sig was preparing for Spring weekend and we were building a float for the parade. We had combined our efforts with (I think) Kappa Kappa Gama Sorority and every night leading up to the big event everyone met at the Beta Sig house for a work session. The theme of the parade was Camelot. The method by which we constructed the float was to build a wooden frame onto a farmer’s wagon which we had rented and then place chicken wire around the frame in a form that resembled a dragon.  Then we would stuff the holes in the chicken wire with brightly colored napkins and crepe paper.  Inside the dragon we were to build a platform upon which Steve Jacobs would stand and blow a tuba or a trumpet which was to be the dragon’s roar. I believe we had a bucket of water in there with dry ice to have steam or smoke coming out of the nostrils.

The project was going along just fine until we realized that we did not have enough wood for the inside platform upon which Steve Jacobs would be standing. Also we were over our budget and didn’t have enough money to buy any more lumber. Al Loeb, our pledge master came to me and asked me to get a pledge brother of mine and go out to find “scrap” wood where ever we could scrounge it. So off we went, Steve Sussman and I, to find “scrap wood”. We tried to find building sites, but there were no scrap pieces to be found anywhere.  It got to be around 11:00 PM and all the girls had gone back to their dorm. Steve and I had brought back a few boards we found here and there, but not enough to finish the project. We finally ended up at a lumber yard around midnight. Steve jumped out of the car, scurried under the fence before I realized what was going on, and to the sound of barking dogs, he began throwing pieces of lumber over the fence and I began packing the wood into my car. I begged him to come out as the sound of barking dogs became louder and closer. But he just kept throwing wood over the fence. I couldn’t just drive away and leave him there. So we loaded up enough wood to finish the project and he finally came out from under the fence covered in mud. He got back into my car and we returned to the house triumphant having accomplished our mission. Allan Fair was the first guy we saw and his eyes bugged out of his head when he saw all the wood. “Where did you get it?” he asked. “O. W.” (name of the lumberyard) was the answer we both gave and I told Allan the story.

From that day on the name stuck. “Steve, I mean O.W. where are you? The cops are still calling me.”